NASA Astronomers bid final farewell to the Cassini Space probe as it flew into Saturn this past weekend. The probe, the first to do a long-term exploration of Saturn, spent the last six months getting on track for its final voyage, a crash landing right into Saturn’s atmosphere, which will vaporize the almost $4 billion spacecraft. NASA is electing to destroy the probe so it does not crash onto one of Saturn’s moons, contaminating some of the probe’s awesome discoveries.

Cassini’s 20-year-old mission has resulted in much more than it had originally planned at its launch in 1997. Cassini is responsible for finding water under the surface of its moons, Titan and Enceladus, which could be the best chance for finding life on other planets.

NASA honored the probe by live streaming its final moments on their website so viewers can also catch a glimpse of Cassini’s final moments. Cassini’s transmission ended approximately 8 a.m. where the spacecraft will break apart in Saturn’s thick atmosphere. The massive gravitational field of Saturn will keep all debris and chemicals away from potentially contaminating Titan or Enceladus with anything stuck on the probe from Earth. 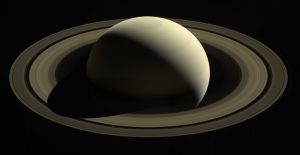 Cassini was so beloved to NASA because it has lasted much longer than anticipated. Expected to last only until 2007, but careful flight planning and fuel conservation have led NASA to keep the probe in operation and continue to obtain data about the gas giant and its icy rings.

Cassini has also produced some of the most breathtaking images of Saturn and its rings that will awe future astronomers for generations. Even in its final minutes, Cassini propelled into Saturn’s atmosphere with its instruments out and its antenna pointed towards earth, allowing NASA to gain more knowledge about Saturn’s foreign atmosphere. The signal will continue to stream towards earth for about 50 minutes, as signals take a long time to travel the 700 million miles from Saturn. “Even though we’ll know that, at Saturn, Cassini has already met its fate, its mission isn’t truly over for us on Earth as long as we’re still receiving its signal,” said Earl Maize, Cassini Project Manager at NASA’s Jet Propulsion Laboratory in a press release.

Although Cassini is gone, the knowledge gained from its fruitful mission will inspire the minds of current and future astronauts for generations. And who knows, maybe it will help us discover life on other planets after all.