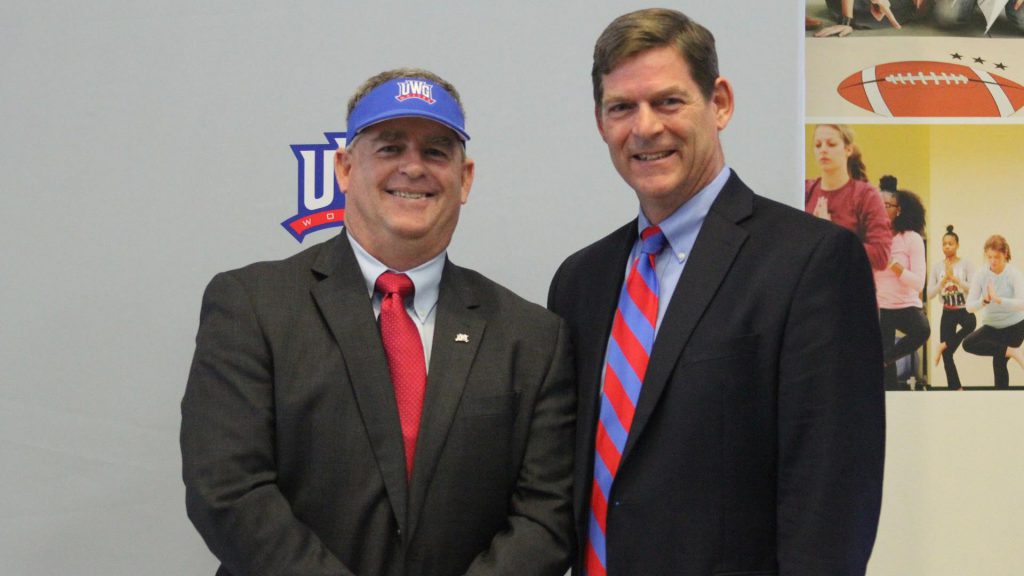 The University of West Georgia wasted no time finding a new head coach for the football team. On Wednesday, Jan. 25, David Dean was announced the 12th head coach at the university after the previous head coach, Will Hall, accepted the offensive coordinator position at the University of Louisiana-Lafayette.

“He was destined to move on to the next level and we are proud of him and his accomplishment with moving on to Louisiana-Lafayette,” said Kyle Marrero, UWG President.

The wolves welcomed Dean with a meet-and-greet event at the UWG Coliseum. “We spent a lot of time on the third floor of the sky box working with some outstanding candidates,” said Daryl Dickey, UWG Athletic Director. “In the end, there was no doubt about the decision that we needed to make, the direction that we needed to go, and who we needed to go there with.”

Dean explained how he is thankful for the opportunity and thrilled to be back at West Georgia in the Gulf South Conference. “I want to thank Dr. Marrero and Coach Dickey for having the confidence and the faith in me to step into this position now to lead this great team as we continue on at the national level,” said Dean. “I am proud to be a part of West Georgia football again.”

Dean already had experience with being a part of the West Georgia football program which helped with the decision of making him the head coach. He was an  assistant coach from 1992-1999. He joined UWG as the running back coach, which is now known as special team’s coordinator. Dean then served as the offensive coordinator his last two years at West Georgia. Dean believes he has the winning formula to help add another national championship title to the football program. “Those things that we preach, those things that we coach, and those things that we teach on a weekly basis are going to pay off, which could lead us to our next conference national championship,” said Dean. Dean plans for the team to be physical, play extremely hard, fast and enjoy playing the sport.

During the meet-and-greet, Dean explained that he wanted to come back to West Georgia to help continue building on a tradition that began many years ago. “The most important thing to me was the former players that contacted me saying we want you to be a part of that again,” said Dean. “They were very influential in me starting to pursue this job.