Skip to content
The City of Carrollton is looking to make some expansions to the GreenBelt in the near future.
The GreenBelt is a large part of the Carrollton community and provides a space for people to safely walk and ride bicycles. Several people use the trail, from UWG students to Carrollton locals participating in things such as 5k runs and outdoor activities. The city built the trail in a loop and is looking to expand it inward in the near future. 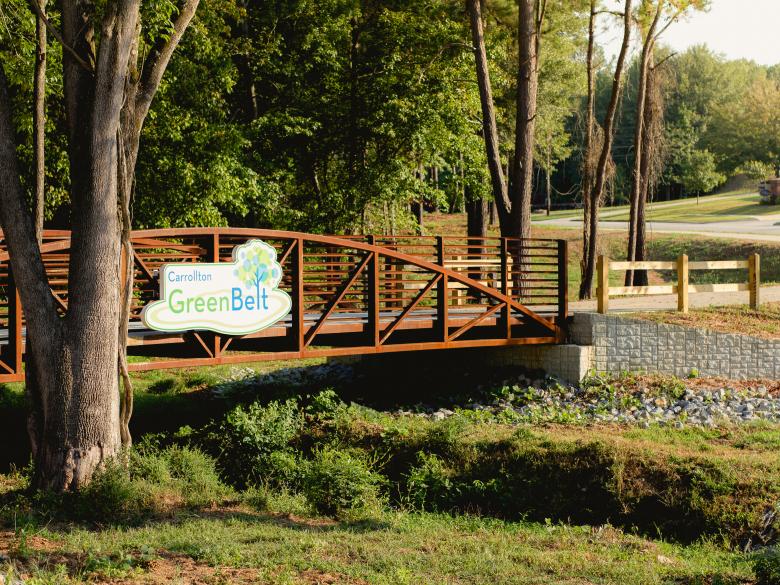 “We built the trail between 2011 and the end of 2016 or early 2017, and we built it in a loop,” said Erica Studdard, the Community Development Director for the City of Carrollton. “We kind of call it our wheel and what we’d like to do is spoke in to the interior towards downtown.”
The goal of expanding the trail inward is to allow the trail to stay connected while creating more areas for people to enjoy. The City of Carrollton is trying to expand the overall trail by creating more connection to what is currently built.
“The first piece that we’re going to be working on is the South Side from where it is over at Tanner and Southwire,” said Studdard. “We’re going to be bringing it up towards downtown. That’d be the first spur, which is what we call it, or spoke on the wheel.”
The goal of this first step is to connect areas of business to the GreenBelt. This will provide easier access to the trail for those who work at Tanner or Southwire. It will also set up a space for people to walk from the downtown areas to other parts of Carrollton via the trail. The biggest concerns with any of these spur expansions is money, approval and time.
“I actually just opened the project agreement from DNR for the South Side spur,” said Studdard. “We are set to go. We’ve got to work with some property owners and hospitals on some of that so it’s probably going to take a couple of months to get some of the plans finalized.”
Now that the South Side spur is approved and funded through a grant from Tanner, expansion will hopefully begin in the spring of 2019. There are no concerns for any roadway traffic problems during the work on the expansion as most of this project will be constructed on the trail itself. Once this project is complete the city hopes to continue to move toward expanding inward with more spokes of the GreenBelt wheel. All of these changes are also bringing about new events for the GreenBelt.
“We are going to launch our first half marathon race on the GreenBelt in September of 2019,” said Studdard. “11 of the 13 miles [during the half marathon] are on the trail.”
The City of Carrollton and the GreenBelt will be sending out more information on the upcoming half marathon in the next few weeks. Those who enjoy spending time on the trail can also look forward to the construction on the new spur to begin next year.