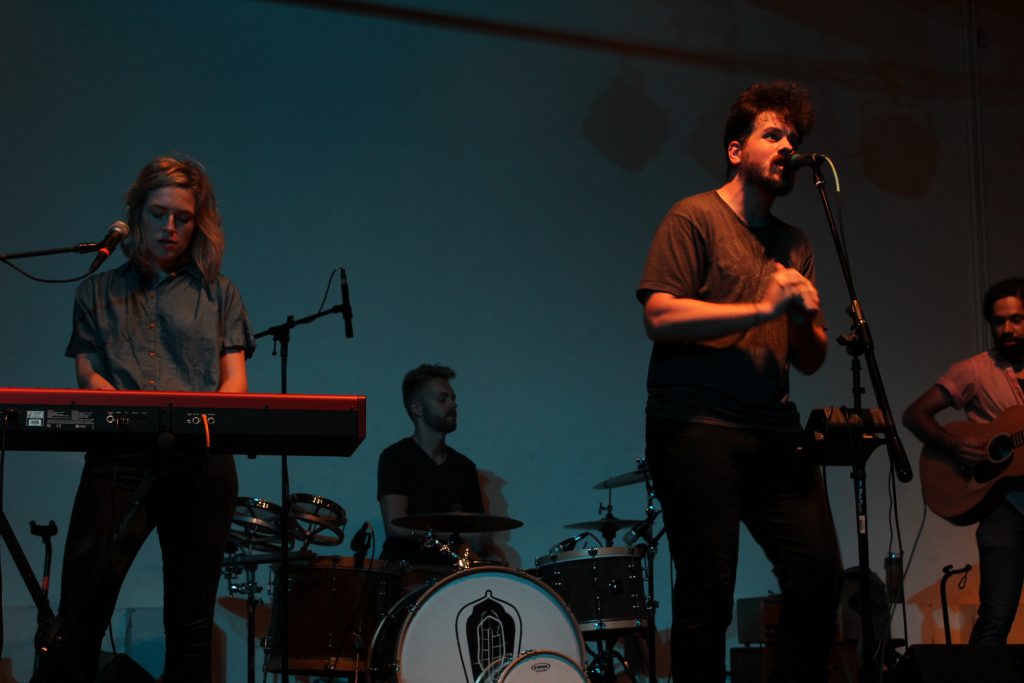 The Collection performed a live set at The AMP in Downtown Carrollton on Oct. 8 as they began to push through the early stages of their Entropy album release tour.
The show was sponsored, organized and hosted by 4am Coffee Roasters and got underway shortly after 6:30 p.m. The concert was both a new and familiar experience to many in attendance as the open amphitheater was filled with both longtime fans of the headliners and with friends and family of the opening band, The Hope Arsenal, which features the talents of six Carrollton natives.
The Hope Arsenal played a brief set flowing with ambient synthesizers, calm guitar strumming and uplifting choruses littered with sustained echoes that drew inspiration from a John Muir-esque view and admiration of nature. As they continued through their set a considerable number of passersby were drawn in and the Amp began to fill with listeners of all ages as their time onstage drew to an end.
Following a brief intermission the overhead lights began to dim and The Collection’s seven touring members took the stage, immediately shifting the reserved tone of the amphitheater to one of energetic amusement that had both the band and much of the audience on their feet and moving. 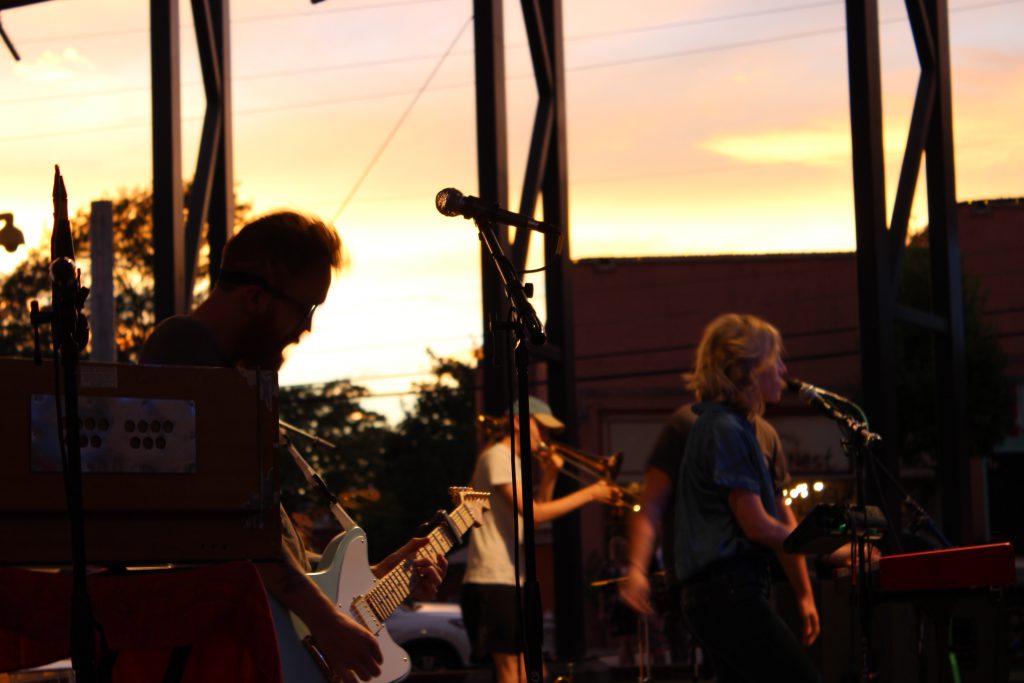 For over an hour the band jumped around the stage to the sounds of funky bass lines, an electric one-man horn section, exciting guitar licks, complex keyboard melodies, thunderous percusion and a wide array of vocals that included tight group harmonies and the uniquely bright voice of frontman David Wimbush. The set also saw much of the audience dancing and singing along as the band performed songs from their two previous albums and their newest album, Entropy, which they released on Oct. 5, only three days before their show in Carrollton.
The album itself is similar to their previous work in many ways, but Entropy certainly shows a clear difference from The Collection of the past. This can be partially attributed to the major shift in the band’s lineup that occurred when many members left the group in 2017.
“A lot of these songs on that recording started out as a kind of solo record during the time when we had quite a few people move on from the band,” said Wimbush. “Originally when I started it all the songs were just acoustic and my voice and then I started adding on some stuff. At that time we filled it in with those pieces but at the time it was just the smallest iteration of the band and so the songs kind of reflected that.” 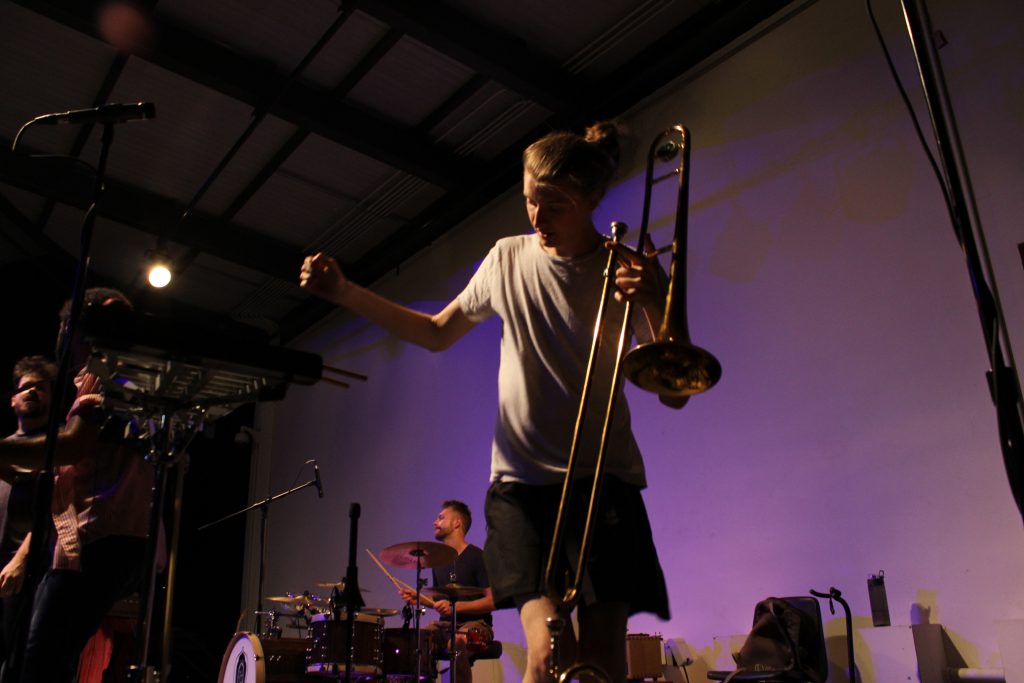 Previous albums by the band also included relatively large layers of brass instrumentation placed around swaying vocals and deeply rooted guitar and violin. This sound has offered up the terms “orchestral-folk” and “big band-americana” to describe the sound and style that have become synonymous with The Collection. Entropy, however, often takes a dive into a more stripped down direction on tracks such as “Carolina Coast”, “Bandages of Time” and “Entropy.”
“In the past it has been really easy for me to approach arrangements out of nervousness and anxiousness in my voice and to throw a bunch of stuff on top of it so people wouldn’t notice,” said Wimbush. “In recording I wanted to leave some more of the stuff feeling a little more stripped down and not feeling like I just needed to throw something on there. ‘Entropy’ is one of the more stripped down songs I’ve ever done and I kept trying to add more to it and every time I did it just felt like too much.”
The early portions of the album also echo much of the band’s previous work while approaching levels of clarity and cohesiveness that the group had not achieved on their prior albums. Many of these tracks make use of light-hearted lyrics and bellowing brass lines to create an upbeat tone of positivity and self reflection. The majority of these tracks were also released as singles and they include “Left of Your Joy”, “Becoming My Own Home” and “Beautiful Life” which sets the tone for the hopeful record and holds a great deal of significance to Wimbush.
“When we came together it was one of the first songs that I had some of the other guys singing on and that we had everyone come in and play,” said Wimbush. “That was the song that brought the record out of being a solo project and back into a band project and feels reflective of the tough place we had been in as a band and I had been in my life before. It felt like the way that it all came together and those things felt redeemed and hopeful was in that song.”
In the end, The Collection have created not only an excellent record but a piece of work that reaches levels of depth and artistry they had previously only began to approach. Likewise, their style and energy during live performances will soon have not only brought excitement to Carrollton but numerous other cities across the nation as the Entropy album release tour heads out west in the coming weeks.