Starting out slow, the Wolves began to build up momentum against the Cougars and managed to maintain a large lead throughout the game. By the end of the first half the Wolves led 62-42. Returning junior basketball player Aren Ulmer shared his excitement about the game and the upcoming season.

“This was definitely the most fun I’ve had during a game throughout the three years I’ve played for West Georgia,” said Ulmer. “The crowd was really into the game. I feel like that motivated us to play to our fullest potential.”

“We played very up tempo, pushing the ball, running the other team as best we could, and scored a lot of points,” said Reeves.

“It was a great win. We expected a lot of energy during the game, and we definitely got that from the team as well as the crowd,” said Shaughnessy. 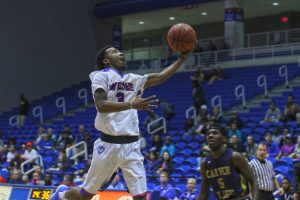 “We definitely have a lot left to learn considering we only have two returning starters,” said Robinson. “I will say we had way more positives than negatives throughout the game. I’m eager to see the turnout of this year’s season.”

“As an upper classman it makes me proud to see our freshmen play at such a high level this early in the season,” said Ulmer.

These four athletes agreed that the exhibition game was a good first step in showing their ability to play as a team and provide a progressive measure stemming from last year’s losing season.

“We know that the sky’s the limit with this team, and we have tons of talent to bring to the court this year,” said Ulmer.

The Wolves had a great preseason showing for this year’s talent and execution as a team striving to make a positive transformation in UWG men’s basketball. The first official game will be held Sat. Nov. 11 against Miles College in Cleveland, TN.