The Center for Adult Learners and Veterans (CALV) has started a new program in efforts to give adult learners and veterans an exceptional college experience. The Green Zone works to promote a safe environment for these groups of people.

“The Center for Adult Learners and Veterans was established in 2014,” said Timothy McGowan, Assistant Director for CALV. “Our mission is a concierge service for those two populations, adult learners and our military-connected students through three transition stages. One of the goals of the Green Zone training is to increase the cultural confidence, in terms of people’s perceptions and understanding the particular needs and challenges of those populations.”

The Green Zone was created and targeted towards helping veterans and adult learners adjust to the college atmosphere. It is modeled after the Safe Zone, which focuses on creating a safe environment for the LGBTQIA community.

“What we want to do is guide veterans and adult learners to where they need to go, to give them a resource,” said McGowan. “We advocate for them.”

The idea of the Green Zone came about at UWG last year when a student at CALV showed an interest in starting the program here.

“We had a practicum student who wanted to work on the Green Zone,” said McGowan. “He worked on the concept, gathered data, looked up various models and started developing the program at UWG.” 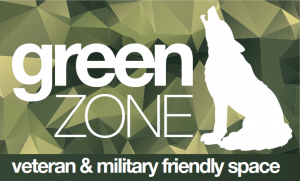 After the first practicum student graduated, another student came in and was willing to help continue on with the development of the Green Zone.

“She spent a lot of time trying to pull the program together and narrow it down,” said McGowan. “She did that work in the fall, so by the spring of this year, we were ready to launch Green Zone at UWG.”

Topics covered during the Green Zone training include the history of Green Zone as well as what CALV hopes to achieve with this training.

“We send out a recruitment message and limit the number of people that take part in the training to 15,” said McGowan. “There’s approximately 60 staff and faculty members on campus who have gone through the training.”

The training is a one-time, 3-hour commitment, where participants learn more about the challenges adult learners and veterans face on the journey of going to college. These challenges include returning to college and being older than the traditional student. So far, the training has been a success.

“A lot of the people who take the training feel as if the training can be longer, which is unusual,” said McGowan. “Most times when people take a training, they’re eager to get out rather than stay longer. The content is such that people are interested in learning more about how to work with our adult learners and military-connected students.”

Something the training participants are particularly fond of is meeting and interacting with the students they’re training to help.

“We try to bring in a panel of on-campus student veterans, so the participants are able to hear from the veterans themselves,” said McGowan. “The veterans talk about their experiences and what it’s been like for them, transitioning from the military to civilian life, and college.”

The Green Zone is a cause close to McGowan, as he has family members with military connections. Although the program isn’t offered to college students, McGowan hopes to see that change in the near future.

“My children are veterans,” said McGowan. “One of my children’s transition from military back to civilian life was very challenging for him. We’ve made the Green Zone training available to specific groups of graduate students, but I think it wouldn’t be a bad idea to open up the program and allow interested students to go through the training.”

In the end, there is one common goal for the Green Zone.

“Our goal is to introduce our staff and faculty to the potential challenges and issues faced in undergraduate, and graduate, student veterans at UWG,” said McGowan.