The issue of the Confederate Flag and its symbol has a long standing role within the history of this country. People tend to grow uneasy when race becomes the topic of attention. Whether it is about the Black Lives Matter versus All Lives Matter movement or the hashtag Criming While White, the country tends to split into two.

The history behind the flag is a complicated issue. The Confederate Flag waved in support for the South during the Civil War. Many Americans feel the flag in 2017 is memorializing Confederate veterans. But often, offensive symbols like the flag are pushed by leaders with a more negative agenda. 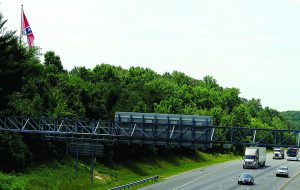 In Fredericksburg, Virginia, a 30-by-30 foot Confederate flag hangs viewable by anyone passing near the Falmouth exit of the Interstate I-95. The flag in Stafford County is placed on the private property of Hubert Wayne Cash. Cash stated that the Virginia Flaggers paid $1 for him to keep the flag on his property for a century. The Virginia Flaggers appeared in 2011 to respond to the removal of a Confederate battle flag from the Confederate Memorial Chapel in Richmond, Virginia, a retirement home for Confederate veterans. Because the flag rests on private property and is protected under the First Amendment, the county representatives cannot do anything without facing the possibility of a lawsuit.

One of Cash’s neighbors, Susan Kate Koisor, felt less than prideful in the history of what the flag represented to her and like-minded people. The flag affected and insulted many of the nearby travelers. Koisor decided there was something she could do about it. While Koiser is a white woman, her adopted daughter is black. With her daughter being her inspiration, Koiser set out on a journey.

Koisor received a permit to raise the Black Lives Matter Flag on her own property. However, this will be no small feat. To build the flag, Koisor needs to raise between $20,000 to $25,000 to make the flag and the pole. Koisor created a GoFundMe account with hopes to raise enough money through donations to have the flag up. While the Confederate flag may come across as a racist symbol, Cash promised that his intentions are purely historical. Cash has even offered his help to get the Black Lives Matter Flag up and moving.

1 thought on “The Symbol of the Confederate Flag”