UWG Junior golfer Sam Jones captured the first victory of his collegiate career with a win at the 2017 Matt Dyas Memorial Invitational golf tournament. The Wolves were the host school for the two-day tournament at Oak Mountain Championship Golf Club. Jones, who overcame a one shot deficit after the first round, shot a final round 69 to win by two strokes. The New Zealand native’s second round score was tied for the lowest among day two competition.

The exceptional score did not come easy for Jones who battled windy and rainy conditions on both days to post a two-round total of 5-under 139. Jones capped off a tremendous fall campaign by finally breaking through for the Wolves and taking over the tournament during round two. 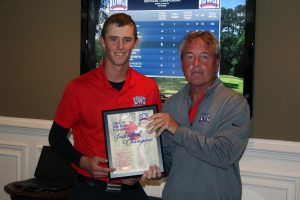 “It was tough out there, on both days,” said Jones. “So I knew that if I stuck to what I was doing in the second round I would be good.”

Jones grew up playing in Taranki, New Zealand, a town located on the west coast on the north island of New Zealand. The climate there is much different that what most golfers face in the southern United States. New Zealand weather can be quirky for golfers as it is very windy and rainy, especially the coastal towns exposed to the ocean.

Weather in the southern United States is fairly predictable save for pop-up thunderstorms during the summer months, so many of the competitors did not know how to adapt to the windy and rainy conditions in Carrollton.

“I learned how to play in conditions like that,” Jones said. “A lot of the other guys that grew up playing here are used to calm weather, they don’t know how to keep the ball under the wind when the weather gets bad. That’s where I knew I had the advantage.”

“Coach Selders is good for us, he kind of sits back and lets the players do their thing,” said Jones. “Coach Harwell was great too, but he was much more intense and expected a lot out of us, and I think we play better with this style of coaching, at least I do.”

“It felt really good to bring the win back to us,” said Jones. “Especially after what happened last year, none of us played well then so this win did feel really good. I was happy to bring it back for Matt.”

Matt Dyas was a junior of the golf team from 2010-2011. He was riding his motorcycle to participate in West Georgia’s homecoming festivities on Oct. 1, 2011 when he struck a car that pulled out in front of him on campus and was killed. Gloria Faith Dupree, the driver of the car, was charged with first-degree vehicular homicide, driving under the influence, and failure to yield. The tournament was re-named the following year in tribute to Dyas.

The tournament wrapped up the fall season for the Wolves, and they look to improve over the winter months and get some better results in the spring season. “The team as a whole I think can play much better, Jones explained. We need to have quality practice time and I need to lead by example and I think we will be good next spring.”